Go vegan, it is preferable at any Age

However, any type of diet can be a malnutrition if certain substances are not adequately supplied.

Preventive aspects of a vegan diet in old age

This results in a lower total mortality and thus longer life expectancy compared to the general population, especially from cardiovascular diseases. These observations are due in particular to the health-promoting effects resulting from the higher consumption of plant-based foods.

A vegetarian or vegan diet can cover the nutritional needs of people into old age.
In addition to the regular consumption of food with a high nutrient density, it is important to prepare and administer it according to the age.

With a full-fledged food selection, a vegan or vegetarian diet provides a variety of vitamins, minerals, phytochemicals and fiber that counteract the onset of many chronic diseases.
Seniors should pay particular attention to good calcium and vitamin D maintenance to maintain bone health.

Practising regular exercise and meditation is a big help to stay healthy and vital. See what Anne is doing, she is a great example.

Read the story of the 96-year-old grandma Anne below

Meet Anne, the grandma who turned vegan three weeks before her 96th birthday 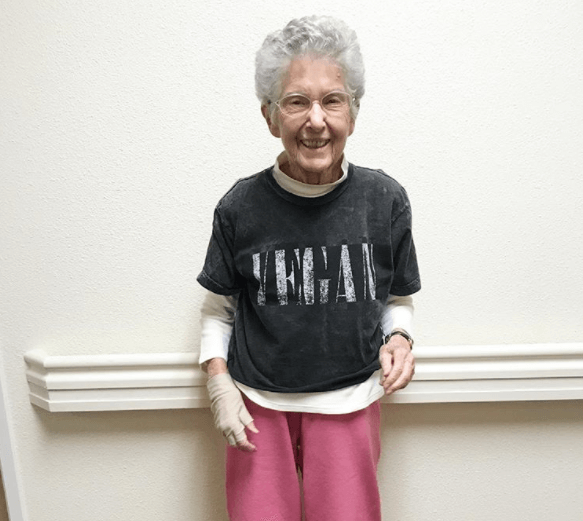 It’s never too late to turn vegan – and here’s definitive proof. Anne Fraser became one just before her 96th birthday and she’s our ultimate plant-based icon.

In fact, it’s safe to say that she looks more vital than most people a quarter of her age. She still practices yoga – in fact, she teaches ‘chair yoga’ and meditation at her community center every Monday.

‘I do think that they go hand in hand,’ she tells Metro.co.uk. ‘I’ve always ended all my classes with the meta prayer, “May all beings be happy and free” and after becoming vegan, and learning how inhumane and cruel our animal agriculture system is,

I realized that I wasn’t doing my part. ‘I was praying for all animals to be happy and free but not practicing it by still consuming animal products.

Now when I say that prayer it has a deeper meaning to me.’ She says she was initially inspired to go vegan after seeing how happy her granddaughter was on a plant-based diet.

TRUCKER BY COOKING VEGAN ON THE ROAD LOST 65 POUNDS

HOW A DEVOTED MEAT-EATER TURNED VEGAN