Buckwheat a high-protein and gluten-free super-grain

No one cares about your protein intake until you’re vegan. Fortunately, the prejudice that plant-based diets cause protein deficiency has often been refuted. Nonetheless, proteins are a big issue in the plant-based diet. 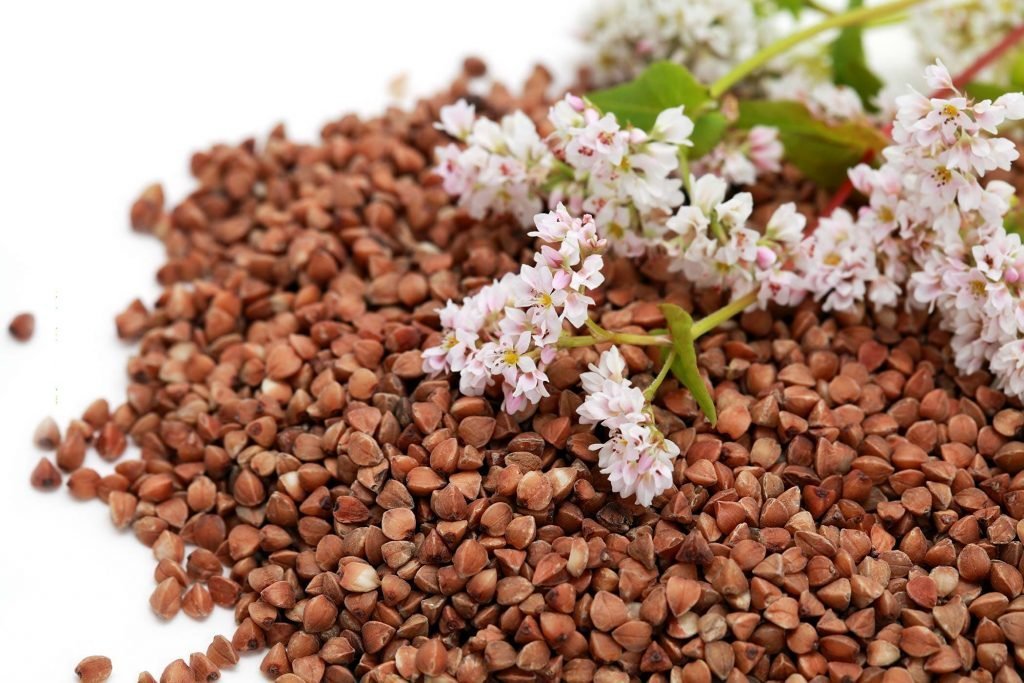 If you hear the term buckwheat, you might immediately think it has something to do with the typical (and unfortunately very well-known) wheat. That is a mistake. Buckwheat does not have anything to do with wheat, even if its name contains the word “wheat.”

Buckwheat belongs to the so-called pseudo-cereals. Pseudo, because they look and taste like grains, but they are not. Buckwheat is much more a Knotweed (
Persicaria}

It grows primarily in Asia and North America because it is susceptible to cold. However, there are also European ones.

You can apply buckwheat both in the warm kitchen (cooked, baked) and in the raw food! It is very convenient to have it at home. You can conjure something healthy and delicious with Buckweed.

Buckwheat, like all other so-called pseudo-cereals, is also gluten-free. It not only makes life easier for celiac disease patients, but also for many other people who want to do without typical cereals like wheat, rye, etc. Gluten plays a much more significant role in illnesses and indefinable complaints than assumed.

Buckwheat is very nutritious. It contains all kinds of minerals like Magnesium and potassium, but also trace elements such as iron and selenium.

Also, it has lecithin, which is extremely important for the liver, which nourishes the liver cells and thus strengthens the natural detoxification function of the liver.

Also, Buckwheat contains Rutin, which has an important antioxidant function, especially in the vessels, because it acts against clot formation ( protective against thrombosis), also strengthens the blood vessels and rutin acts anti-inflammatory and thus ensures that no deposits can form in them. It is essential for cardiovascular function and counteracts high blood pressure.

Germinated buckwheat has a lot more nutrients. The values ​​of the minerals and trace elements, as well as the vitamins, increase. There is a kind of explosion of nutrients in favor of our health.

Buckwheat is also full of good vegetable protein. Mainly if you germinate, it contains all the essential amino acids that can be easily absorbed by the body and easily recycled. 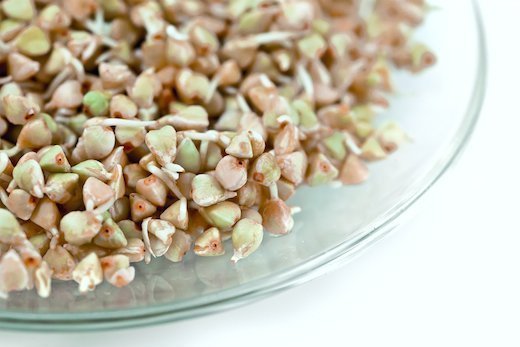 Also, germinated buckwheat contains a large amount of coenzyme Q10. The Q10 know many only from advertising as “anti-wrinkle remedies” in some creams. Q10 acts as an anti-aging agent against wrinkles. But you can also take up co-enzyme Q10 through the diet and do not need creams. Take advantage of it

How to use Buckwheat?

You can cook buckwheat, for example, in the morning as a kind of porridge, as many would do with oatmeal, just gluten-free. You can also bake great gluten-free bread with buckwheat flour.

The raw, sprouted form, is recommended, simply because otherwise you will not get so many nutrients and positive effects from it
Some people soak Buckwheat only overnights and then eat it in the morning for breakfast, with fruit and almond milk. Then it is still raw, but not germinated, that is not as nutrient-rich as germinated.

To germinate buckwheat, soak the desired amount with plenty of water for 20-60 minutes. No longer, as it loses its germination capacity if you soak it too long. Then you rinse it off thoroughly. Give into a seed glass (or just a sieve) and let it germinate for 1-2 days. That is enough because in a maximum of 24 hours the seeds will germinate like crazy! During this time, you should rinse it thoroughly 2-3 times a day. In the beginning, at the granules form a slimy, milky secretion that looks like the rinse water. Do not be worried, that comes from the starch, but passes.

When they have finished sprouting, rinse thoroughly and drain again and then use directly in the morning in the cereal.

Also, you can make from germinated buckwheat, in combination with sunflowers or other seeds a delicious sweet or spicy crunchy treat Also use it for bread or in a salad, with vegetables.

Also important to know that Buckwheat is optimal for a healthy plant-based diet. A raw or vegan diet is not just carrots and apples, but there are also foods with which you can conjure up all sorts of things, feels well saturated and miss nothing. 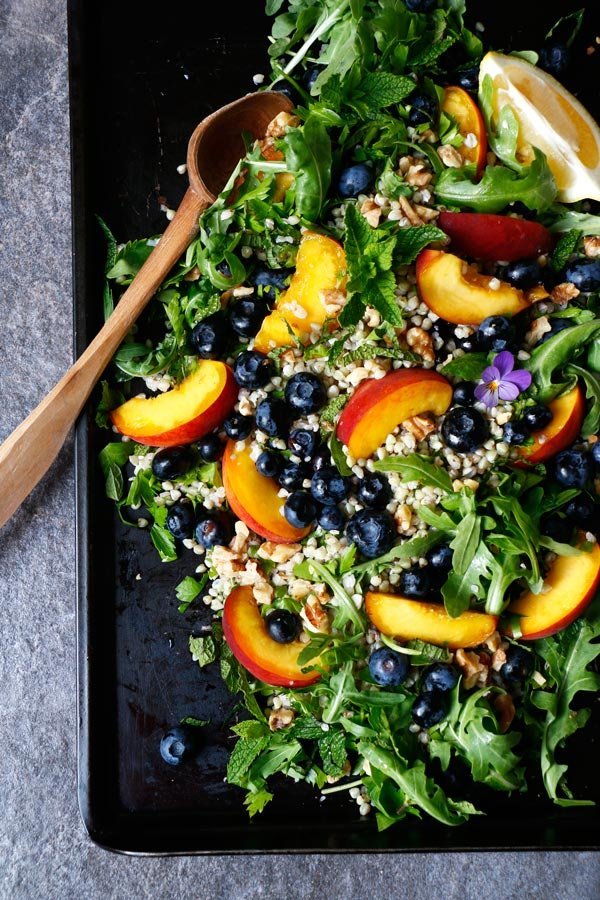 Buckwheat groats work amazingly well in a salad and are really quick to cook so it doesn’t take too long to throw this salad together. This Summer Buckwheat Salad has totally lifted my summer spirits yesterday with all of the colors and summer vibes. I’m totally in love with it, the flavors are amazing and with all of the fresh herbs and beautiful summer fruit this salad is such a treat.

You have got to try this incredible taste explosion of a salad. It is fantastically easy to prepare and is naturally gluten-free as it has a base of sprouted buckwheat. 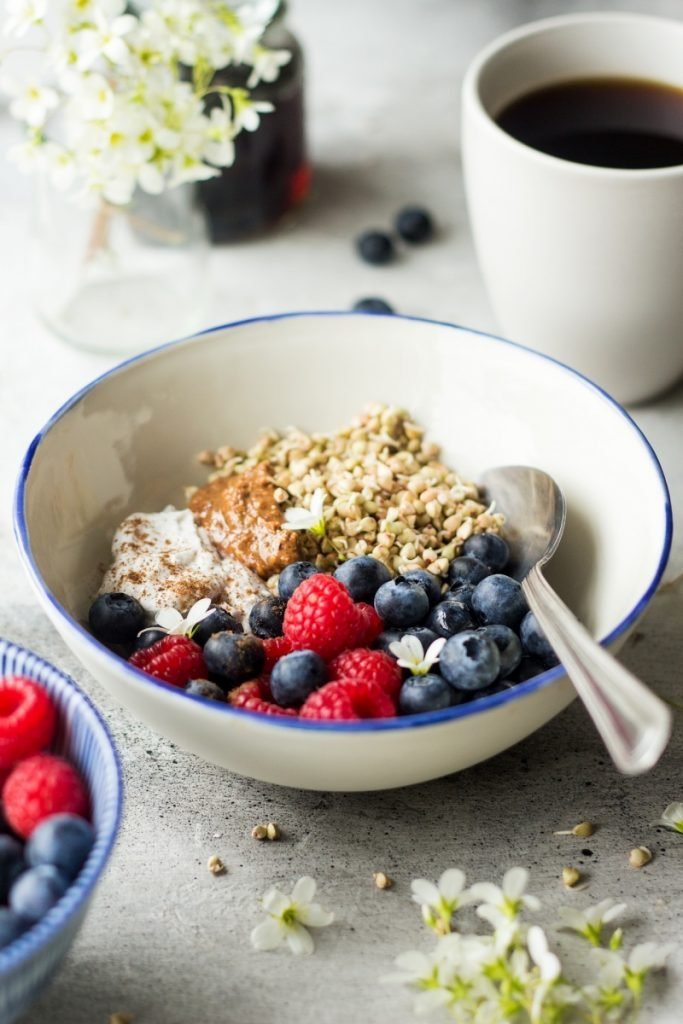 Sprouted buckwheat is soft and has a pleasant nutty taste. I paired it with a big spoonful of creamy coconut yogurt, almond butter, heaps of berries and a touch of maple syrup.

It’s one of these breakfasts that travels really well too so you could easily bring it to work in a jar, for example. Layer fruit, yogurt and nut butter in a jar and place it in the fridge overnight, in the morning top it with some freshly sprouted buckwheat and you are good to go. 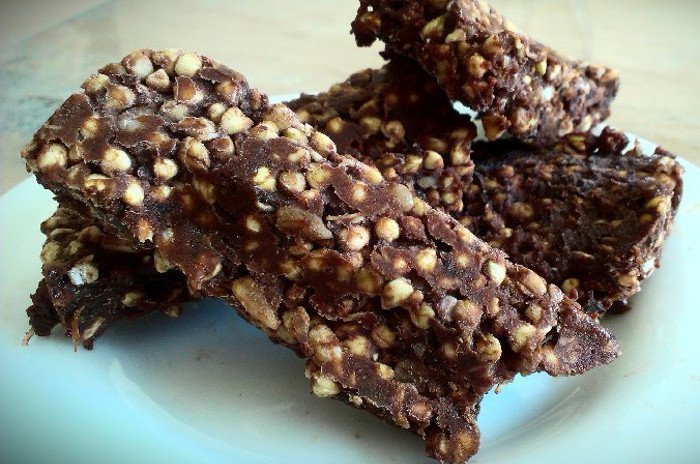 The first foods that come to mind are soba noodles and buckwheat pancakes. A reliable option for the gluten-intolerant, buckwheat flour is used in baking, replaces barley in the manufacturing of gluten-free beer and is a protein-packed nutritious substitute for rice. Here the recipe for raw veganised ‘rice crispy treats’. 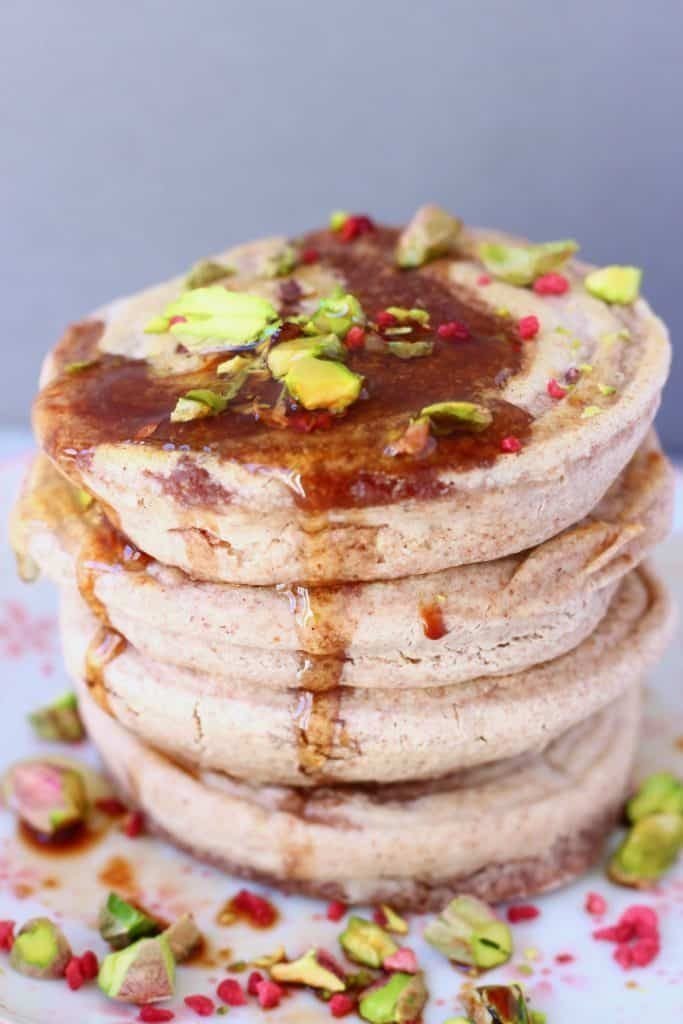 I soon realized that the more buckwheat flour I used, the fluffier and more delicious the pancakes became. So, I went all in and tried making a batch with 100%buckwheat flour, and guess what? They were the best! 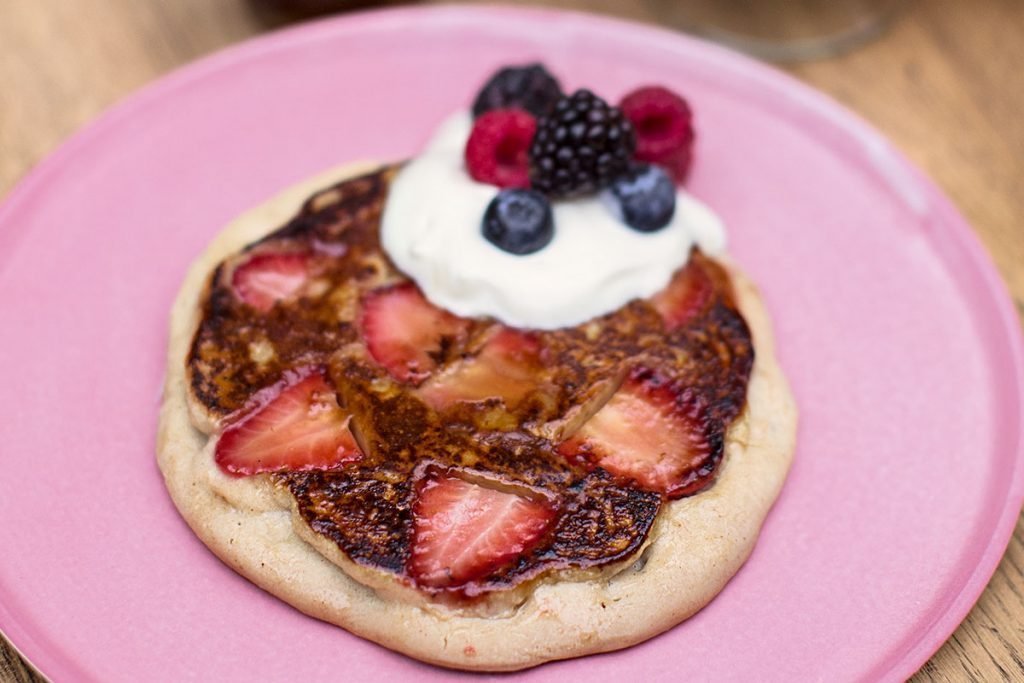 “This super-tasty pancake batter is perfect for vegans, plus buckwheat flour contains the mineral manganese, which we need to keep all our connective tissue strong and healthy. 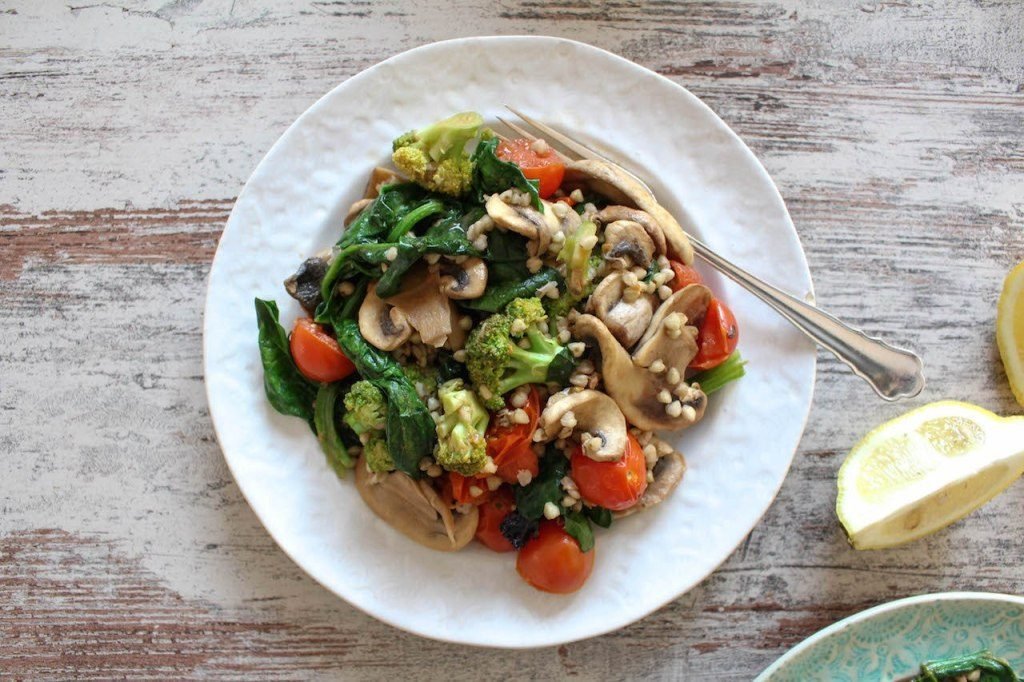 Besides from buckwheat, this stir fry combines spinach, tomatoes, broccoli, and mushrooms, all of which come with amazing health benefits. Mushrooms, for example, are the only vegetable that can produce vitamin D. Broccoli contains lots of vitamin K, but also potassium, which is one of the most important minerals for maintaining healthy blood pressure. Tomatoes contain lots of antioxidants, which help fight free radicals and help protect against chronic diseases such as certain types of cancer. 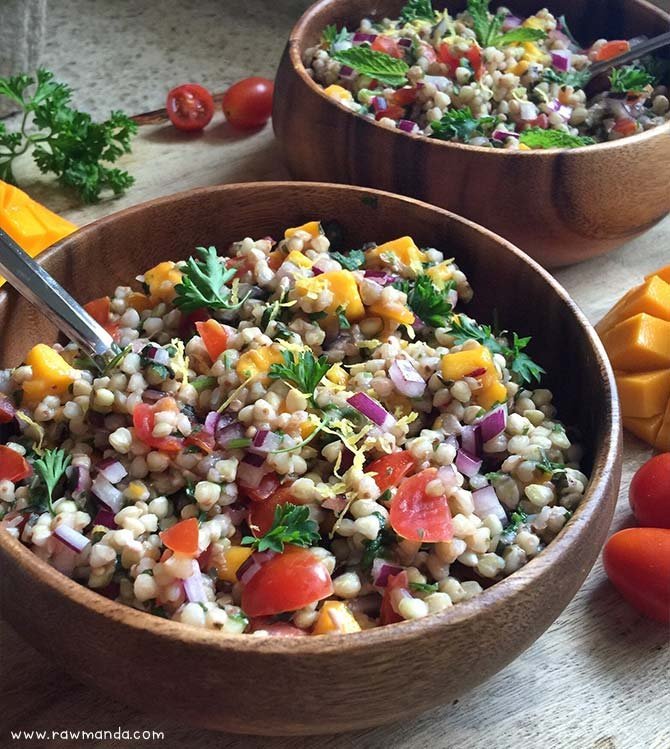 I used yellow mangoes in my tabbouleh instead of cucumbers, because well… I have a mango addiction and had a bunch of ripe ones around.  Feel free to use cucumbers instead.  You could also use chickpeas or add your favorite fruits or veggies.  Don’t feel like you HAVE to follow my recipe exactly. Adjust the herbs to your liking – just use what I have as a starting point and make modifications with the ingredients YOU LOVE. 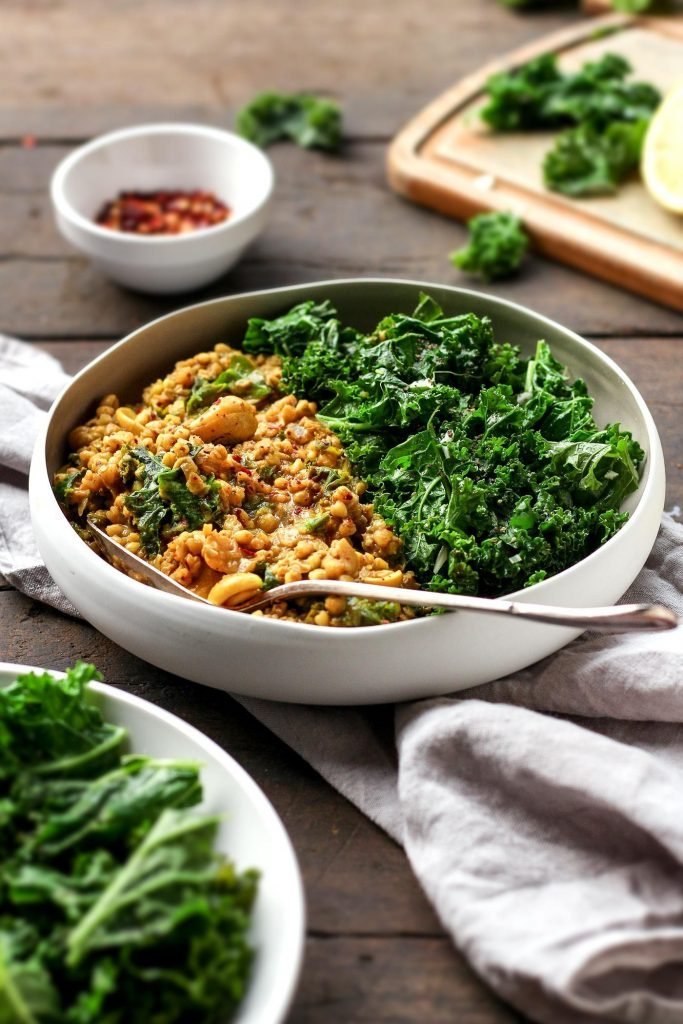 This creamy curry is lightly spiced with cumin, coriander, turmeric and smoked paprika for a little bit of heat. The base is buckwheat groats, which are cooked in a mix of coconut milk and water.

Buckwheat is not a grain, it’s a gluten-free plant, don’t ask me why there is “wheat” in the name though. It has a soft texture, similar to arborio rice with a nuttier flavor. This curry reminds me of risotto in term of texture. 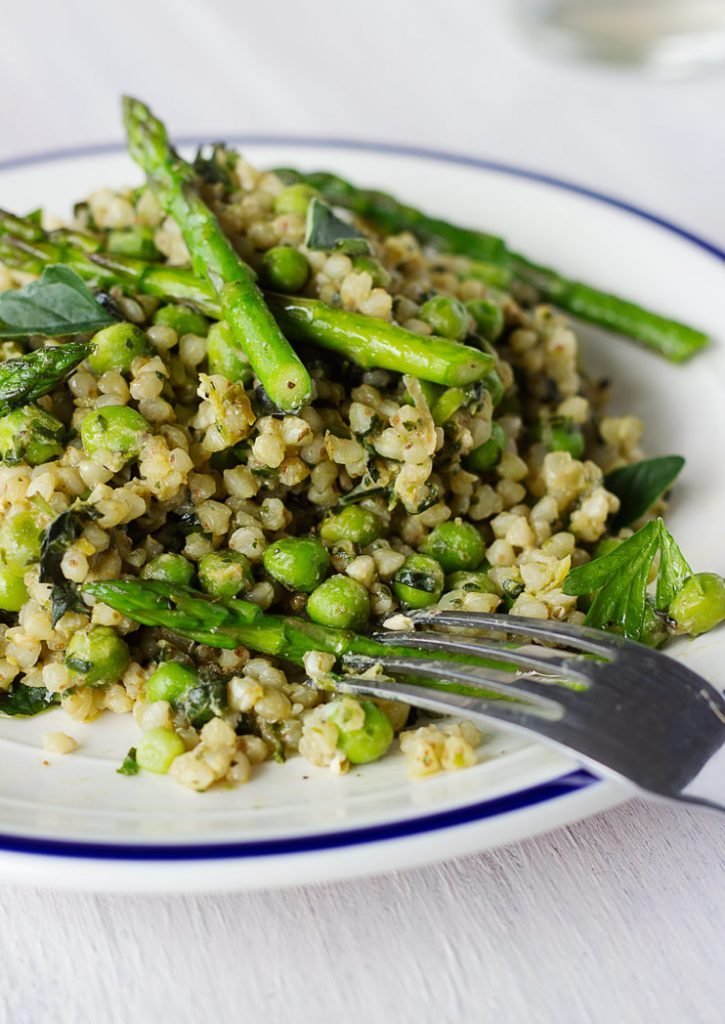 This is a super tasty, light, a vegan take on risotto. The asparagus and peas make it taste like spring, and the nutritional yeast gives it a delicious nutty and cheese flavor that doesn’t make it too heavy. It’s the kind of dish that won’t weigh you down and require a 3-hour nap right after eating. It’s summer-y, fun, and light! 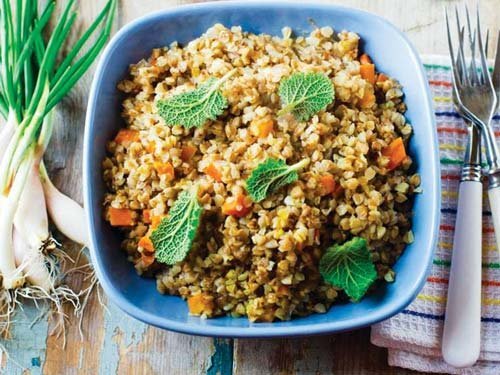