Veronica & Amy is the name of the two who started the vegan lifestyle and cooking after an adventure with 4 hens which they rescued and made them pets. The two sisters started a blog and share ideas for living more ethical a vegan lifestyle and recipes.

Now they are the crowned winners of the Great Vegan Bake Off. 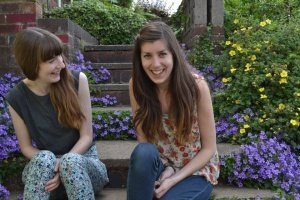 Two sisters from Chesham have been crowned Britain’s best vegan bakers. After a fortnight of voting, Veronica and Amy Pearce – graduates of Chiltern Hills Academy – were announced as the winners of the ‘Great Vegan Bake-Off’ competition organized by PETA.

The pair, who became vegans three years ago after rescuing and raising four commercial hens as pets, won the prize with their vegan chocolate beetroot cake which contains – amongst other things – coconut palm sugar, maple syrup, and two whole beetroots.

PETA’s Mimi Bekhechi said: “We were inundated with terrific dishes and it was a real task to narrow the entries down to just 10 finalists.

“The Pearces’ decadent chocolate cake had us salivating. The addition of beetroot is both unexpected and inspired, and the duo’s easy-to-follow recipe shows just how simple vegan baking can be.” source :

More recipes fromThe Great British Bake Off  including a

I love beetroot! Whether it’s roasted, shredded up raw in a salad or squished up in a burger, it’s blimmin’ delicious AND it’s in season for most of the year! Win, win, win you might say? Well not always…

If we take asparagus as a contrasting example, it’s in season for such a short amount of time that it’s like, quick, quick cook something delicious before the season is over! But with beetroot, it’s just there month after month and it’s like, more beetroot but I already had it fives ways last week, what can I do with it now?

Well I have the answer, chocolate beetroot cake!!!

Also, see >You Will Love The Wedding Cake Of The Royalties Made Vegan