In spring, we welcome the Rhubarb season.

It is Rhubarb season. Rhubarb tastes sour, and you can use it in many recipes. But did you know that the plant was used as a medicine 5,000 years ago? How rhubarb promotes health and why you should still be careful when eating it.

By the way, rhubarb is not a fruit but a knotweed plant and is, therefore, a vegetable. What we all know: Rhubarb tastes sour. But the plant can do much more. It was valued as a medicine as early as 5,000 years ago. In Asian countries, for example, the roots of the plant were powdered to stimulate digestion.

From where does it come?

Rhubarb comes from the Himalayas. The deciduous plant grows up to two meters high, flowers from May to June, and has a long history. it was used as a medicinal plant as early as 2700 BC. At that time, the root powder helped against constipation and even the fight against the plague.

Beginning in England, the plant found its way to the rest of the world in the 18th century. Due to the high popularity of the plant, it is now grown in temperate climates around the world.

Rhubarb is a vital vegetarian vegetable. One hundred grams have just 13 calories. Rhubarb has a concentrated load of vital substances: potassium, iron, phosphorus, and vitamin C. It strengthens the immune system and increases fitness.

There are many different types of rhubarb. All have different properties, not only in appearance but also in taste.
There are varieties with green skin and green flesh. These varieties have a rather sour taste and are pretty unpopular with many people. In addition, they contain a lot of oxalic acids, and sensitive people with kidney problems or gout better avoid the

Milder varieties have reddish skin and also green flesh. While the greener varieties are considered more productive, the red-fleshed types score with a sweeter taste. Accordingly, varieties with red skin and red flesh are the sweetest.

Another critical difference between the individual rhubarb varieties is the different levels of oxalic acid. Peeling and cooking reduce the oxalic acid content and makes the fruity sticks more digestible.

But the time of harvest also plays an important role. An earlier harvest produces a lower oxalic acid content. The younger stems are softer and more delicate. In the later harvest, the oxalic acid content is considered too high for safe consumption.

At the beginning of the season, rhubarb tastes milder
If rhubarb is too acidic for you, you should grab it at the start of the season. Then rhubarb should taste a little milder.

Every year the question arises: to peel rhubarb, or not? Maybe you don’t have to peel the red sticks at all and can save a lot of time? Here comes the answer!

As soon as the rhubarb season starts, you may feel like a delicious rhubarb cake or compote but having to peel the poles makes you lose anticipation.
But maybe it isn’t necessary? Do you have to peel rhubarb, or is that a wasted effort?
But rhubarb is very healthy and has a pleasantly sour taste.
Can you eat rhubarb unpeeled?
Yes, you can eat rhubarb unpeeled. The peel is non-toxic, and you don’t have to worry about health consequences if you forget to peel it. However, adult stalks, in particular, tend to be fibrous, which doesn’t taste very good with cakes, compote, and desserts.
You can process mall sticks as is. However, it is always important to consider how fibrous the lower part of the poles is.

Peeling the rhubarb reduces the oxalic acid content. This acid is present in large quantities, especially in leaves. For this reason, you cannot and should not eat them.
Consuming too much oxalic acid can be detrimental to health and inhibit calcium absorption in the body.
Sensitive adults and children should be careful: You should peel the rhubarb here. Also, if you cook the sliced ​​stalks and discard the cooking liquid it decreases the acid. To bind the acid, combine the rhubarb with calcium-rich foods.
Better to peel the rhubarb when the stalks are particularly large or older.

A little oxalic acid does not harm our bodies. But it would be best if you did not overeat it either. Incidentally, most of the acid is in the leaves, so it is best to dispose of them in the compost or organic waste.

Remove and wash rhubarb leaves
Remove the leaves, if any, from the stems before you begin peeling. They contain a lot of oxalic acids. By the way, you don’t have to throw the leaves away; you can use them to make fertilizer for plants in the garden.

After removing the leaves, you should wash the rhubarb thoroughly under running water. It will remove any dirt and sand that may have stuck to the stems during harvest. If you want, you can also use a wet kitchen towel.

Remove the interface
If you don’t harvest the stems fresh from the garden, you will notice dry cuts at the bottom of the stems. They have dried out and become hard from storage. Cut them away with a sharp knife. Now you can grasp the fibers particularly well with the knife, and the peeling of the rhubarb can begin.

Peel the rhubarb Grab the end of the poles. Use the sharp knife and pull the fibers upwards. The best way to do this is with a small kitchen knife. If the fibers are particularly stubborn, cut this piece off the poles. Remove all fibers until none are visible.

You can use a potato peeler if you want, but you usually remove more than necessary.
Tips to thoroughly remove the peel
Scald sticks before peeling
The fibers easily detach from the still-raw stalks when you reach for hot water. Peeling the skins is easier and more thorough if you scald them with hot water.
To do this, place the sticks in boiling water for a minute. Fish them out of the water again, rinse them off in cold water, and the fibers will come loose.

If you want to freeze rhubarb, you should only remove the peel just before further processing. Because by freezing the cells, the fruit’s skin no longer adheres so firmly to the pulp and can be more easily removed along its entire length. So it’s worth leaving them in one piece when freezing.

If you don’t have any health problems, you don’t have to peel it. Also, if you buy the poles from a dealer you trust or grow them yourself in the garden, simply rinsing them off is enough. If the sticks are a little older, it is worth peeling them – the skin becomes hard.

Those with sensitive stomachs prone to kidney stones or children should always peel the stalks.

Rhubarb can also be grown very well in containers on the terrace or balcony. 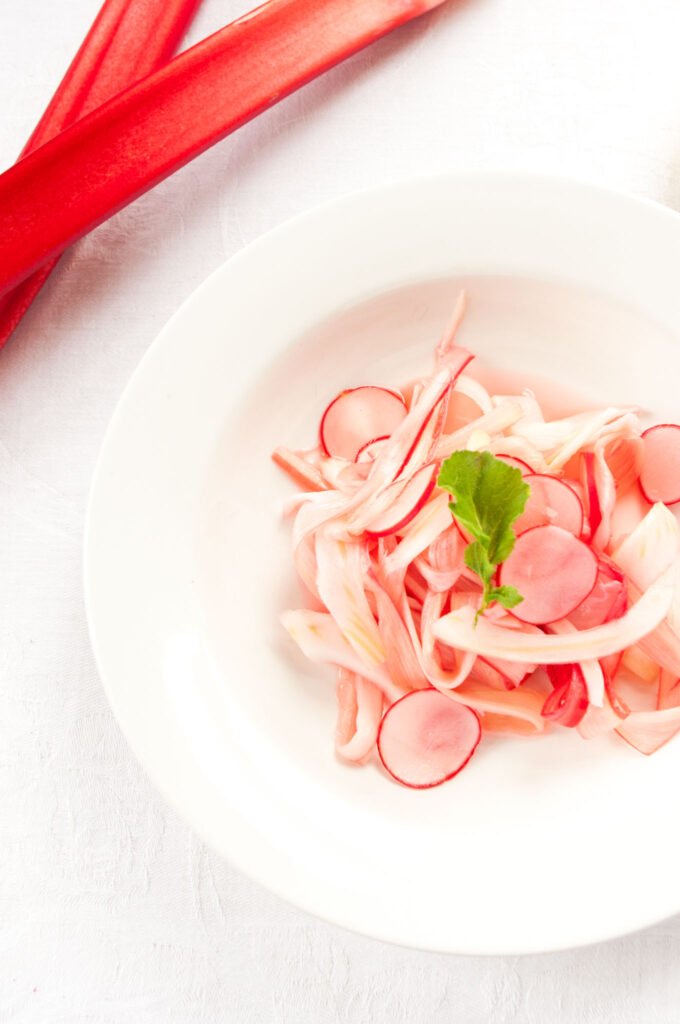 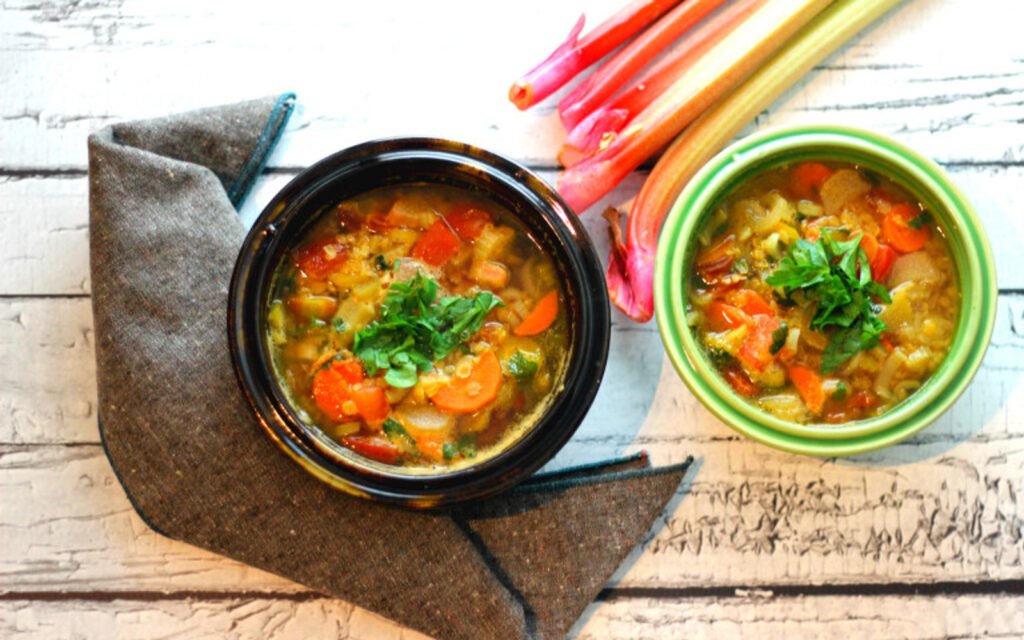 This recipe artfully combines the savory, hearty aspects of lentils with the sweet and tangy qualities of rhubarb into one stellar soup. It’s the perfect soup to sip while you watch a summer storm or a spring shower. 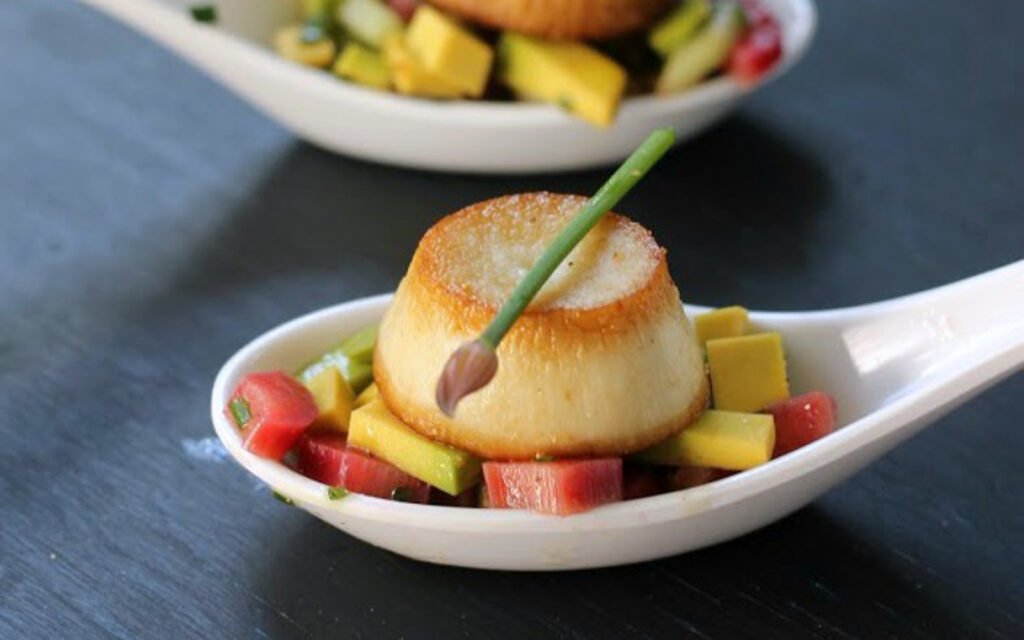 The key to vegan scallops are King Mushrooms. When you slice the stems into rounds, they look exactly like scallops. They even have that slightly rubbery bite that you get with scallops. 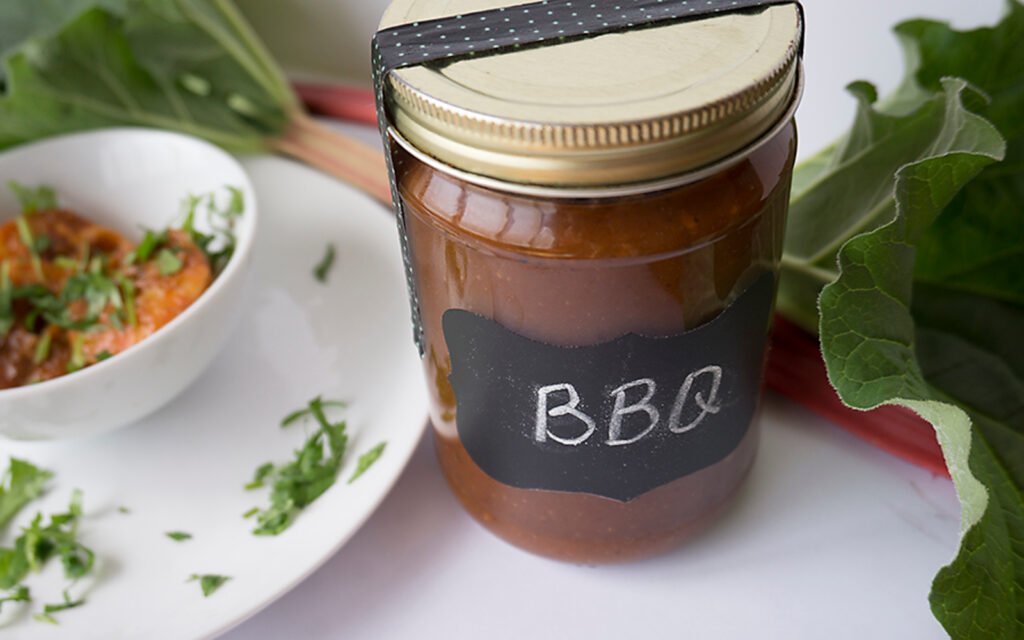 Half of what makes a great dish is an excellent sauce. This BBQ Sauce is tart, savory, and can be applied to a range of dishes. 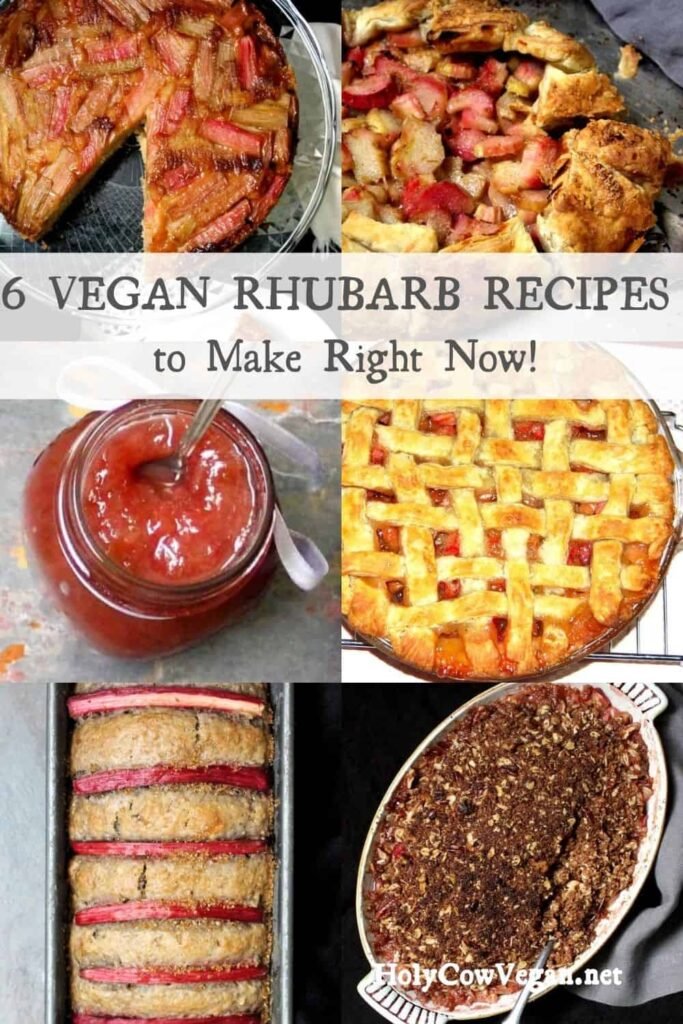 Whether you love rhubarb, have never tried it before, or have an iffy relationship with it, these are the recipes that will make you realize the incredible potential of this veggie.