Millet and Quinoa are both gluten-free.

Millet or Quinoa? This is here the question. Many know Quinoa from the health food markets and have used it. But what about Millet? You know millet only as bird food and are curious if it can be used for a meal? Millet is an ancient grain.

In Africa, it is for 78% of the population, the main source of protein. Cultivated there for about 6,000 years. In India, it is used to make roti. Indian vegetarians love millet; it is rich in fiber. It helps with complex carbohydrates to meet the daily protein.

In  Ethiopia, people make porridge with Millet, and the Caribbeans cook it with beans and peas.

Quinoa as well is a source of fiber and protein. Both Quinoa and Millet have anti-inflammatory benefits and hold blood sugar levels stable. This makes it a good food for people with diabetes. Read below more about these two seeds.

See, Millet or Quinoa; which one of these healthy grains do you prefer? The best may be to include both of them in your diet.

Millet Or Quinoa Which One Of These Healthy Grains To Prefer? 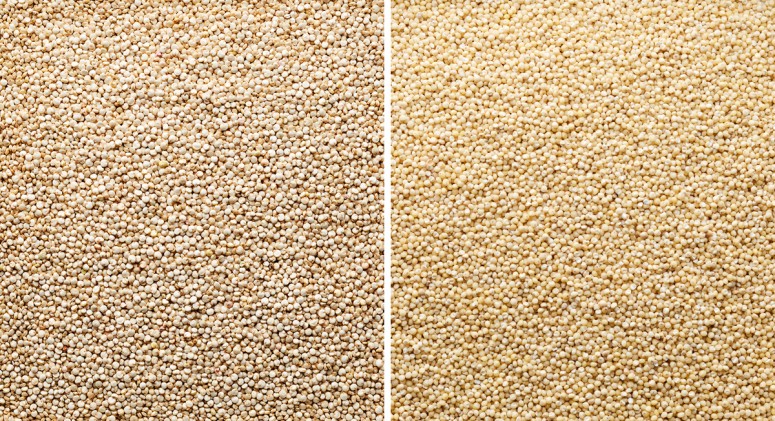 Rice and oats have long been staples in the standard American diet, but for those that eat low-carb or are gluten-free, these two ingredients aren’t always an option. Instead, there are other ways to go against the grain with nutritious choices like millet and quinoa.

Both are incredibly versatile—great in porridges, breakfast bars, salads, sides, and any other number of recipes—and also come with a good boost of protein and fiber. But, millet and quinoa aren’t always interchangeable. Keep reading to learn more about their unique characteristics, the best ways to cook them, and how they can be utilized in a range of dishes.

Millet is a true cereal grain that’s able to thrive in harsh, arid, dry environments and has a short growing season, which has made it a more popular option for farmers and grocers (though it has been cultivated in Asia for nearly 10,000 years). The most common type is called Pennisetum glaucum, also known as pearl millet.

It appears as small round, yellow balls that look somewhat like birdseed—but don’t let that turn you off. Its ability to be used in various foods, as well as its high nutrient content and suitability for those with Celiac disease or gluten intolerance, has placed it in the spotlight in recent years.

In fact, millet is fast becoming a staple in some developing countries, and for a good reason, since it’s packed with energizing B vitamins and protein as well as filling fiber that can help with weight management and digestion. It also has good doses of calcium, which helps maintain the health of bones and teeth, as well as magnesium, a mineral touted for its anti-inflammatory effects.

How to cook millet

Millet is quite easy to prepare—all you need is one part grains to two parts water. Rinse the millet in a sieve or colander, and then mix the grain and water together in a saucepan over medium heat. Once the water starts to boil, turn the heat to low and let the mix simmer for 10-15 minutes. After that time, the water should be completely absorbed and you’ll have a tasty grain that just needs a little fluffing with a fork to serve. This is the ideal way to make millet if you’re intending to add it to a sauce or mixing into a soup or another rich base.

If you’d prefer to add some grilled veggies on top or want to mix the grains in with some kale for a filling salad, you might want to make the millet a bit more moist. To do so, simply add some more water (roughly three parts water to one part grain), which will make the millet a bit thicker. Cooking with vegetable, beef, or chicken stocks instead of water can also up the flavor factor, as can adding a mix of herbs and spices.

Now that you know how to make millet properly, here’s how to add it to several creative dishes.

Over oatmeal? Ditch your regular morning bowl and go for something deliciously soft and creamy, simmered with almond and coconut milk. Spices like cinnamon and cardamom make it especially flavorful, and you can add in a bit of honey or syrup for a subtle hint of sweetness. Try it a few times a week, and change up your breakfast mixture by throwing in fresh berries, nuts, and even a few cacao nibs for variety.

HOW TO MAKE A GLUTEN-FREE VEGAN MILLET PIE (VIDEO)

8 HIGH-PROTEIN MILLET RECIPES YOU WILL LOVE

THE MOST COLORFUL RECIPES WITH MILLET